Home>About Us > Our Staff 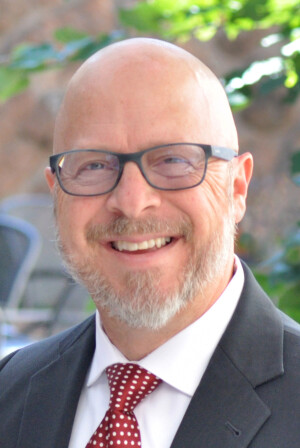 The Rev. Dr. Corey Nelson has served as Senior Pastor and Head of Staff since September 1, 2016. Now in his fourth year, there is so much for which he is grateful—for the warmth and welcome of this congregation, for FPC’s vibrant witness as a diverse downtown church, and for the shared vision that continues to lead us towards deeper discipleship and greater impact in our world.

Corey grew up the youngest of three in Michigan and Washington State, focusing on music from an early age, as a trumpet player, drum major and participant in a national Drum & Bugle Corps. Intending to become a high school music director, he attended Whitworth University in Spokane because of its acclaimed Music Education program. Whitworth’s Presbyterian heritage and campus ministry led Corey from his Pentecostal origins to eventually join a local Presbyterian church, where he was active in missions as a young adult.

After working for two years as a high school music director near Seattle, Corey served for two years as a Presbyterian Young Adult Volunteer, first in Belfast, Northern Ireland and then in Ghana, West Africa. During this time, Corey discovered the potential impact of the church in action around the world to bring healing, wholeness, joy, and abundance to diverse communities—and heard a calling to full‐time pastoral ministry.

Corey attended McCormick Theological Seminary in Chicago, where he received awards for preaching and church history, as well as serving as Choral Director and interning at Second Presbyterian Church. During seminary and for five years following, he also worked for PC(USA) national office in world missions, theater, communications, and education.

Rev. Nelson took his next step to become Dr. Nelson, earning his Doctor of Ministry through Garrett Evangelical Theological Seminary as a member of an inaugural degree program partnered with Northwestern University’s Kellogg School of Business. His dissertation focused on best practices for strategic philanthropy, especially within faith communities.

Corey and his wife, Miriam, love spending time outdoors—checking off National Parks, sharing a meal with friends, attending a house concert, cheering for our CSU Rams (and the Cubs!), meeting new people and exploring new terrain.